Jinxi Caddel﻿'s new book "Feathers of Inspiration" was a tribute to avialan inspired art. The submissions to the project were so overwhelming that they had to split it into 2 volumes... one for tattoos and the other for paintings, drawings and mixed media art. Amongst these hundreds of artists I was very proud to not only have my work featured, but also be given a two page Artist Spotlight interview on my Haida designs and the attempt to revive the traditions. 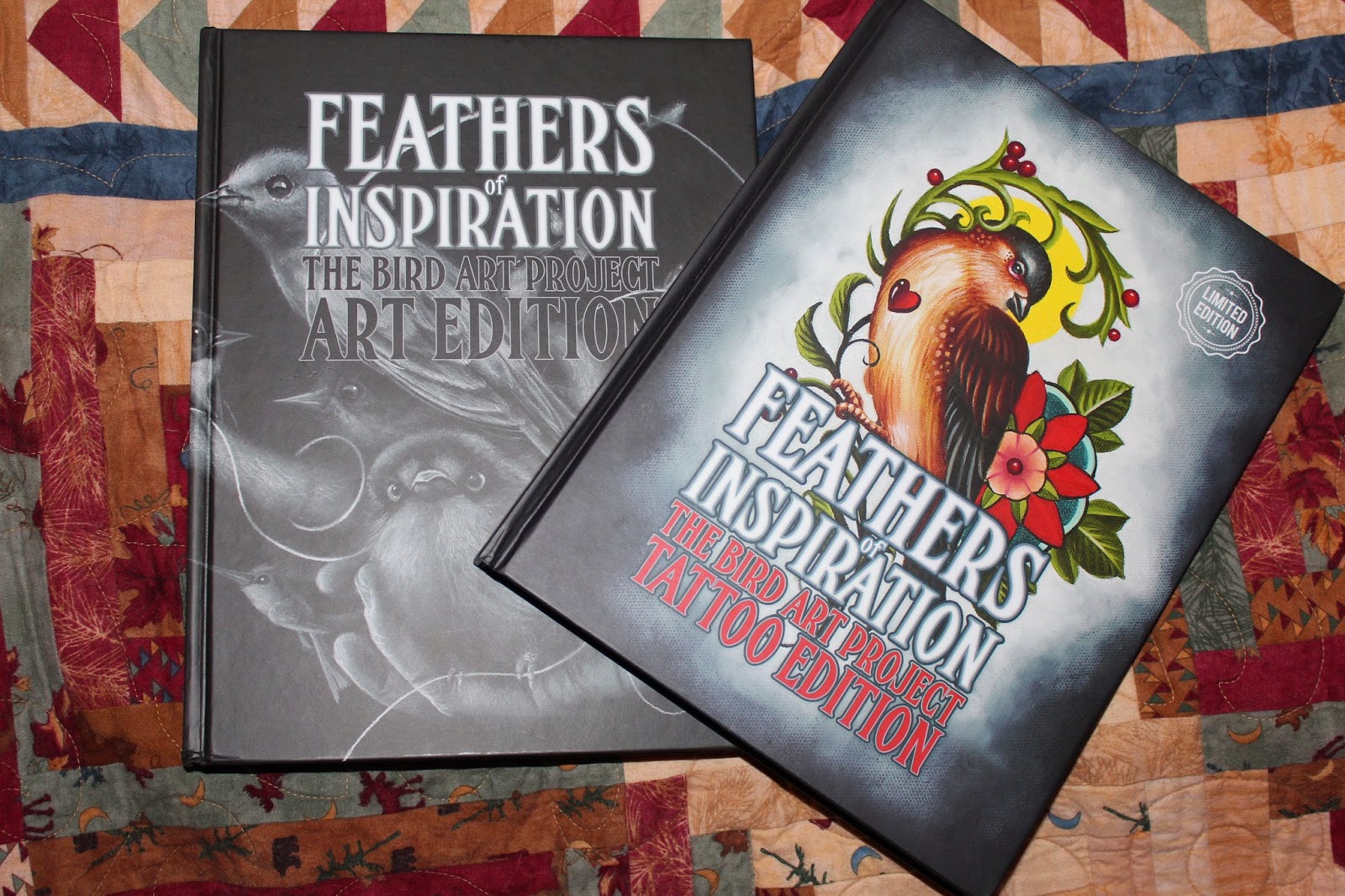 Other Tattooists from Scandinavia included in the books are Nick Morte from Lucky 7 in Oslo, who was also given a Spotlight interview on his painting. As well as the tattoo work of Gunnar Foley from Sweden, Chicho from Tigre Tattoo and Amina Charai from Bright Side Tattoo both in Copenhagen 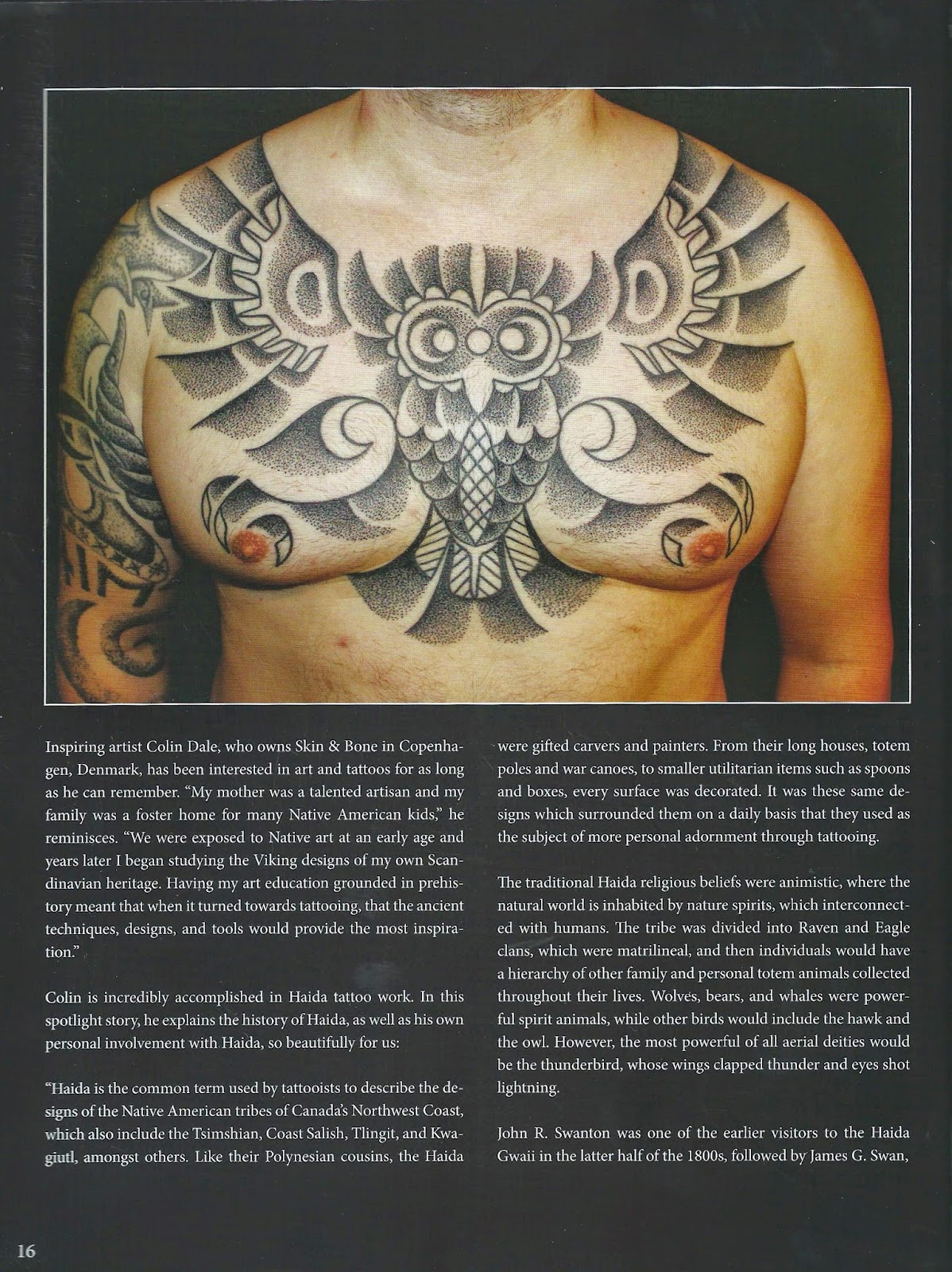 A Haida inspired Owl (the dragon is not my work)
I had the owls claws grab the nipples and placed a couple of negative spirals in the hip joints.
I also placed the phases of the moon in and between the owl's eyes which fit well symbolically with a nocturnal creature. 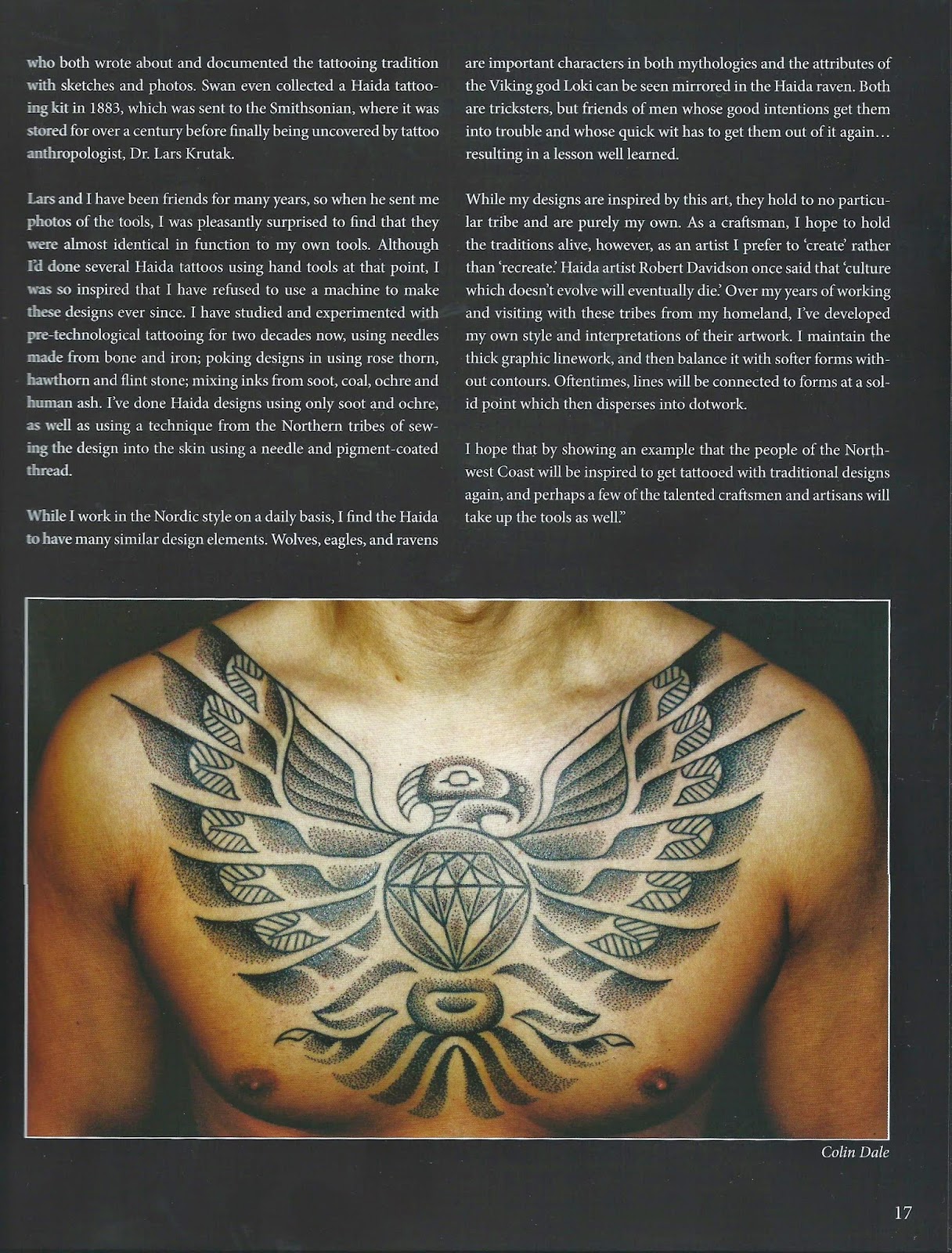 This Eagle was done on an Inuit client... who has a son named "Diamond" 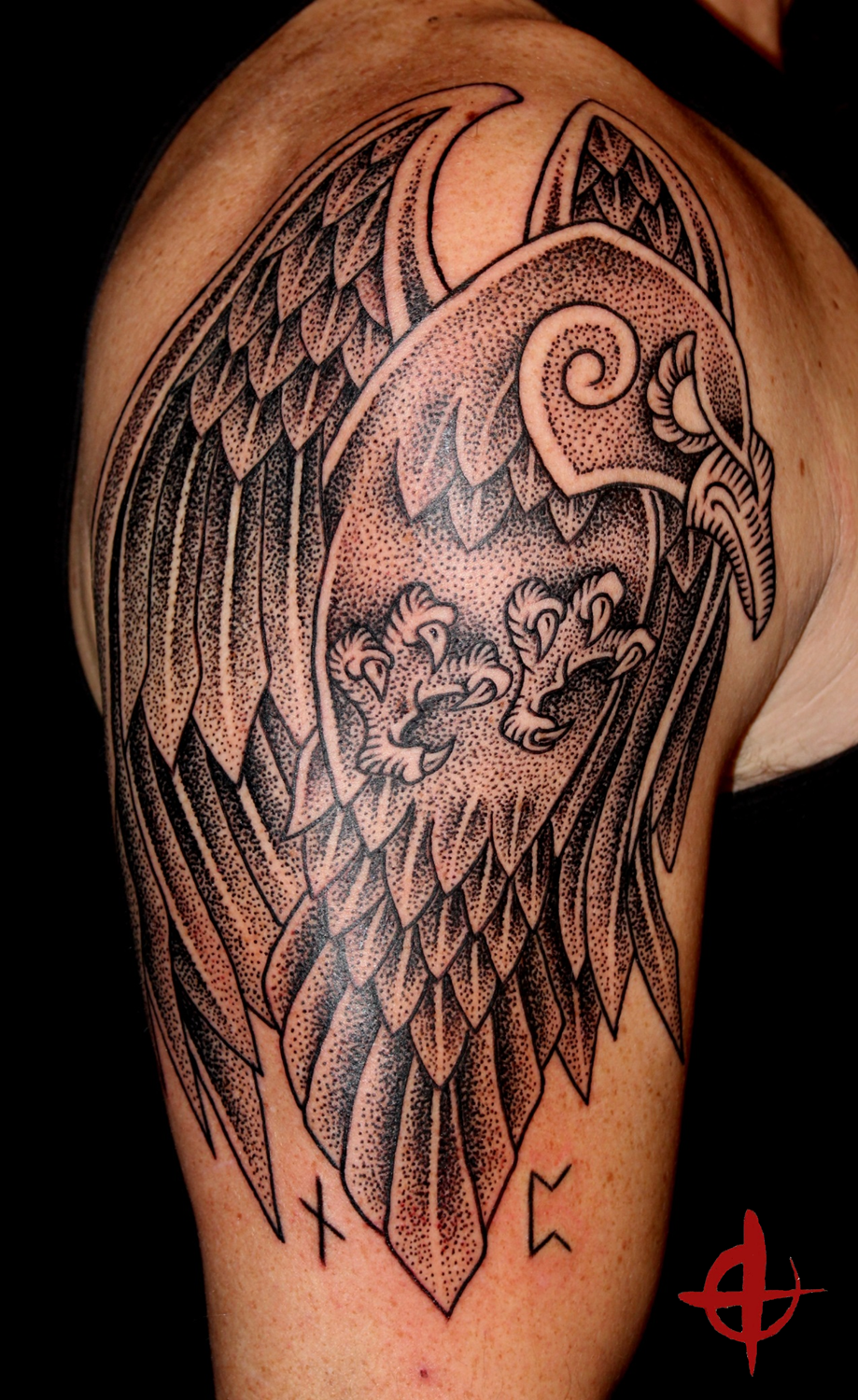 I've tattooed Nicholaj and Phillip Ravn since they came of age and they regularly make the long tour from Fyn to get tattooed by me... usually sharing a full day session. This time I finally got to tattoo their father... his first tattoo :-) Their family name, "Ravn" is the Danish word for "Raven" and as I had already tattooed Nicholaj and Phillip with this bird, their father chose the same (with runes for his two sons tattooed by hand).
Jinxi loved the idea and story so much that she wanted me to write an Artist Spotlight on it for the Feathers of Inspiration book. Although it is a good story I talked to her about instead of doing a personal story for the Spotlight that I would rather do something with more cultural significance. So instead of telling a "person's" story we opted to take the opportunity for something which might inspire a "people" instead. And thus the Haida article came to be.
It was nice that they still included the Nordic Raven in the book though :-) 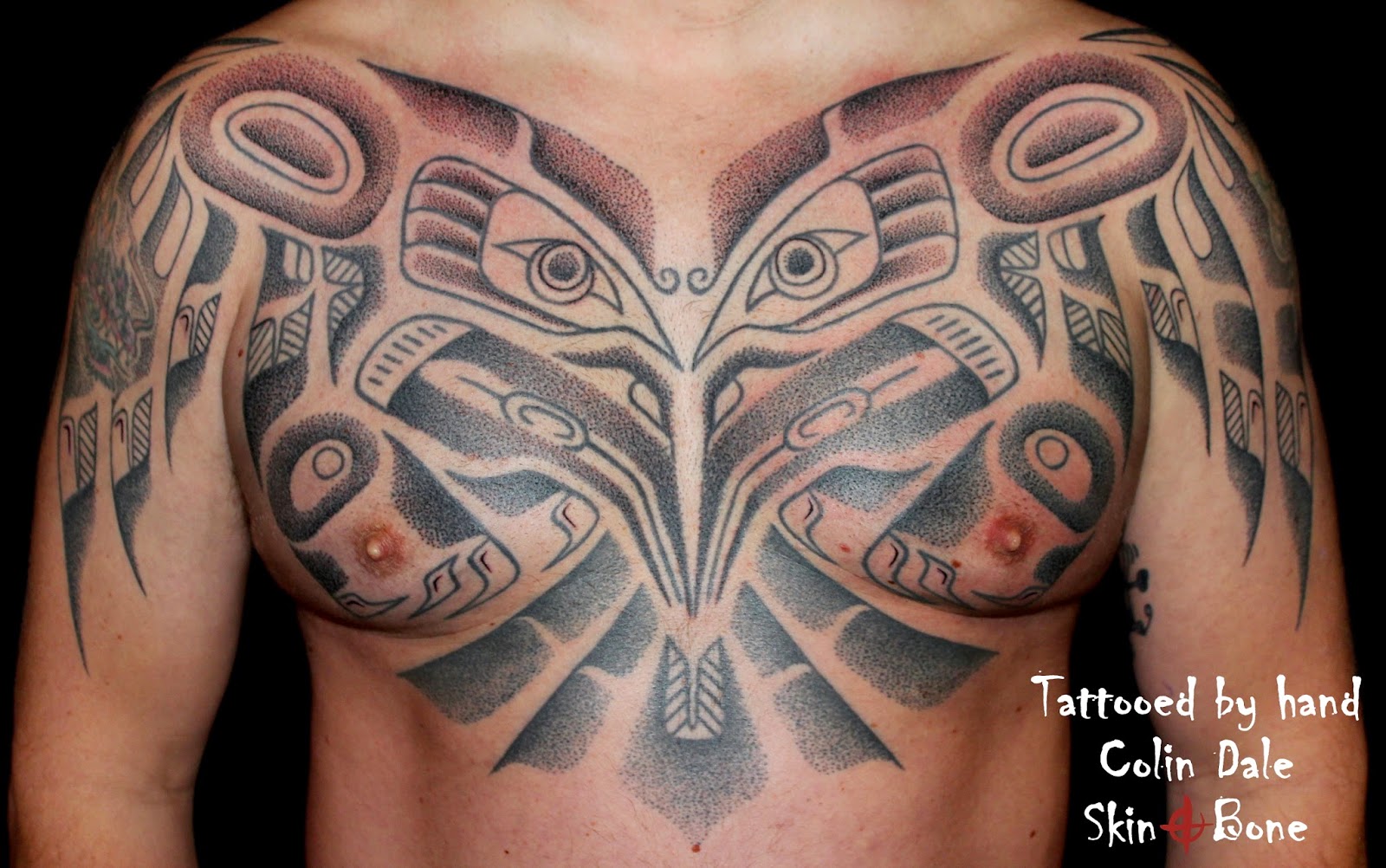 And a couple of Haida pieces from this week... I was just finishing up this Haida Thunderbird when The Feathers of Inspiration books were delivered to the studio.
René is a Danish Fireman and originally wanted a Phoenix in the Haida style. Although I could render a Greek phoenix in the Haida style I opted instead to keep it to a more traditional design. We therefore decided on the Haida equivelant of a phoenix... and the Thunderbird was born. The Thunderbird's wings clap thunder and his eyes shoot lightning... he is the bringer of fire and rain. A perfect symbol for a firefighter. This powerful mythological creature also had to be done in a big way... so the wings were extended onto the shoulders. 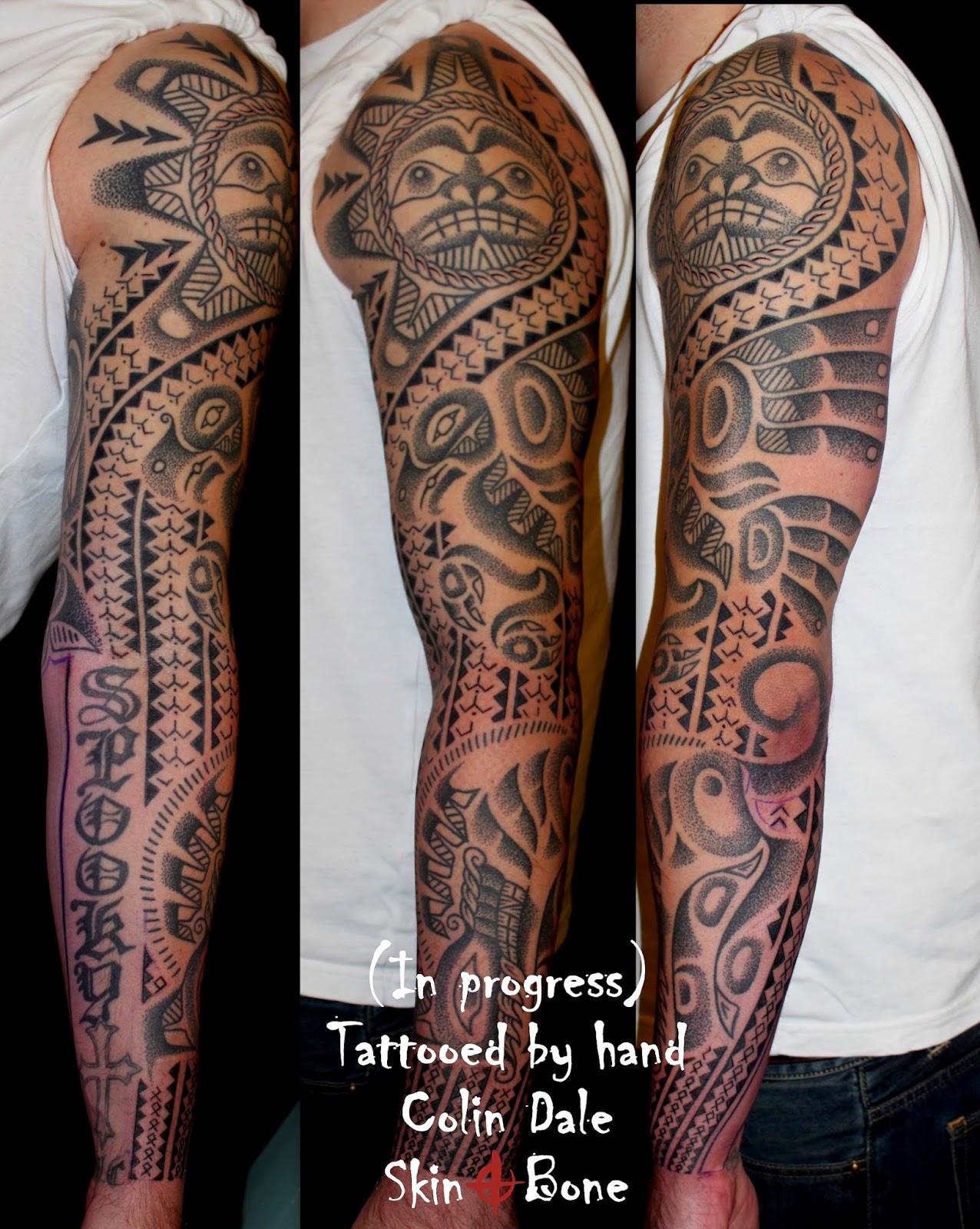 Continuation of the "Pan Pacific" sleeve on Lars from last Friday
Haida totems for the 4 elements (fire/sun, wind/eagle, earth/wolf, water/salmon)
Tied together with freehand geometric patterns (birds swooping down/fish swimming up)
All tattooed by hand. We will be completing this in the Spring