Thanks to Beccy for including me in another article for Skin Deep Magazine after such a short period. We got to talking while interviewing for the "Kings & Queens" article last year, featuring 12 artists in Copenhagen. She knew that Nanna and I travel alot with Loki and are very active in the tattoo community. When Beccy became pregnant she got an idea for an article on pregnacy and tattooing and figured as a tattooist and parents Nanna and I might have some opinions on the subject. I'm sure alot of my comments were edited for space, so I've included the questions and answers as well as a few extra photos I sent if you scroll down

The article is out this month... Enjoy 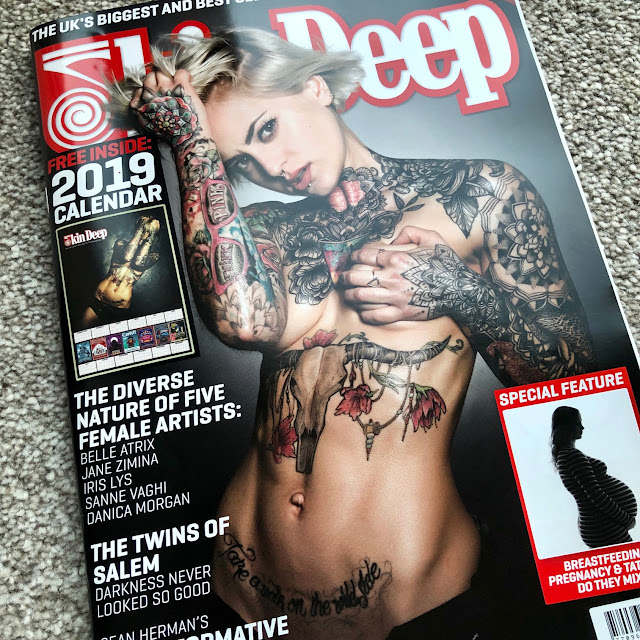 Cover at the news stands 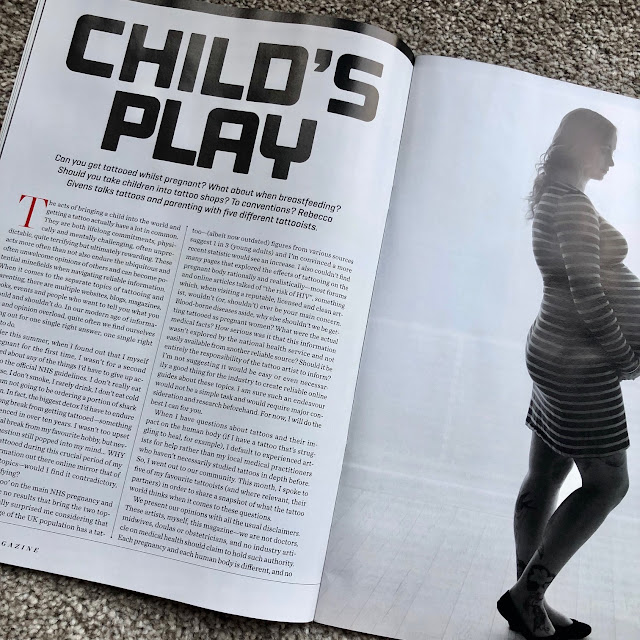 Every designer knows that parallel line make you look fat! ;-) 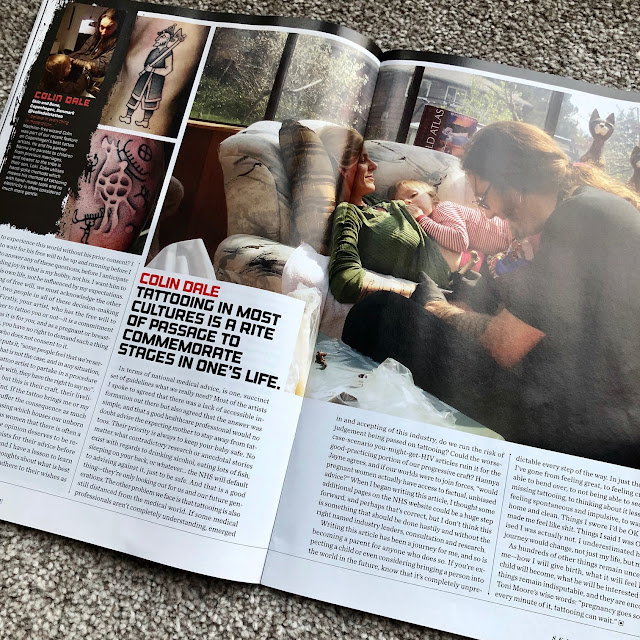 > What is your experience of pregnancy and parenthood, are you parents? Tell us about your family. 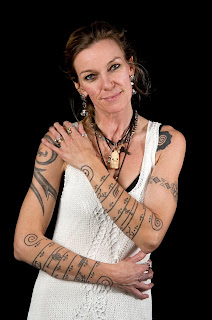 Nanna and I both have grown children from previous marriages and had never really expected to have Loki come into our lives at such a late date. We had already been traveling a lot, both to Viking markets in the Summer and Tattoo Conventions throughout the year. Loki quickly became a part of this and had already been on 50 flights by the time he was 2... traveling mostly in Europe, but also occasional trips to Canada, India, South Africa, etc. When we opened Skin&Bone 9 years ago it was to have a studio close to home where our friends from other countries could come to work and visit, but also where we could be together as a family despite my late hours. Skin&Bone is like a second home.

> What are your experiences of pregnancy and tattoos - do you think it’s OK to get tattooed whilst pregnant and why? If so, why do so many people shy away from it, and if not, why is it best for women to rest in pregnancy? Feel free to write as much as possible! Have you ever tattooed anyone who was pregnant? 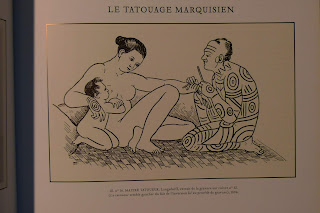 While I would recommend against it, I have tattooed a handful of women during pregnancy with no problem. It might not be advisable for the first months or for a first time client as hormones and stress can be unpredictable. Everything in moderation... I don’t think a glass of red wine is gonna hurt the baby either, however a couple bottles or on a daily basis is probably not the best life choices. A whole backpiece or long sessions might also not be advisable, as your body will be under stress and using it’s energy to heal rather than grow.
I tattooed Nanna forearm when she was 4 months pregnant, while in Tahiti. She has had more than one child and many more tattoos... was not stressed and generally falls asleep while getting tattooed. The Tattoo Festival was in an open air venue on the beach and I tattooed her by hand which takes more time but is also less stressful on the body. The difference between Festivals and Conventions is that Conventions are made for entertaining adults, with loud music, freaks and burlesque shows... while Festivals are more about the culture of tattooing, with traditional art, song and dance. Lots of children were in attendance as well as school groups who came to learn more about the varied traditions of the different cultures attending.


> And how about breastfeeding - I know women who get tattooed whilst breastfeeding but others who prefer not to, do you think it is OK and is it different for every person or tattooing method? 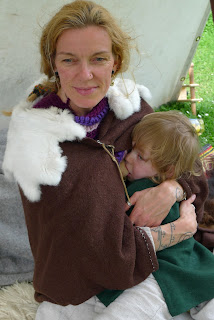 I tattooed Nanna’s second forearm a few years later on Vancouver Island while she was breastfeeding Loki. Again this was done without machine so it took much longer but was less intrusive on the body. Traveling as much as we do breast milk was indespencible... pressure changes in flights and changing sleeping patterns were no problem as well as less luggage to handle. If someone is stressed about tattooing it might affect the milk... but I’ve heard of more people being affected by strawberries than by tattooing when breastfeeding.

> Here in the UK a lot of children aren’t allowed in tattoo studios… as a tattoo collector I am keen to show my child what tattooing is, from a young age, as it’s such a big part of my life, but I feel this may be difficult and I may not be allowed to bring my child into the scene. What are your opinions on this? Do you think there’s a way children can learn about tattooing without it interrupting the regulations of a studio and the artist trying to concentrate working? 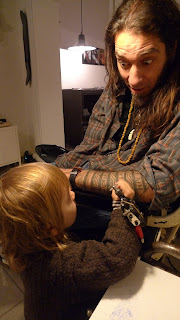 In some ways this is understandable... children can’t be tattooed and in the old days studios were a haven for men to get together and “shoot the shit” without wives and children about. There was a bit of danger and romanticism to that time, however it hasn’t always been that way. Tattooing in most cultures would start as a rite of passage to commemorate stages in ones life. Passage from child to adult would be attended by the whole family... to mark the birth of a child, it makes sense that the child was also present. Children can be a distraction, especially if a tattoo is over many hours... they get bored. Loki has always had a place at the studio to draw, eat, see films, play computer, etc. He would often come after school for a few hours until I was finished work and he is also with us everyday for a month tattooing out of a Viking tent in the Summer. However if he gets bored and is a distraction he will also be asked to leave.
The street the studio is on will hold several annual events... flea market, street party, Halloweėn, Christmas market, etc. For many of the weekend events held during the day we have been open for children’s tattooing ;-) We have an old barber chair at the studio and I’ve renovated a few of my old machines to have a pen cartridge on the needle bar or to hold a sharpie instead of a grip and tube.  The kids climb up in the chair and get all the sights and sounds (and fear) of getting a real tattoo... and walk away just as proud as any naval cadet back in the day :-)
I actually had a client the other year whos mother contacted me about getting him a half sleeve dragon done using hand tool for his 18th birthday. Seemed strange, but after further inquiry I discovered that his two (much) older sisters had been tattooed by my mentor. However it didn’t stop there... it turns out that I had actually did a sharpie tattoo of a dragon on him at a Viking market about 15 years earlier which he still remembered :-)

> Is there anything else you want to share about tattooing and parenthood?
Thank you for your time!

Actually we just returned from French Polynesia where Loki finally received his Tahitian name given to him by Mammi & Papi Sam, the tribal elders from Moórea.
He is now "Loki Paitoa Dale-Grandberg"

Email ThisBlogThis!Share to TwitterShare to FacebookShare to Pinterest
Labels: Presse